Is it Time to Kill the Oxford Comma? 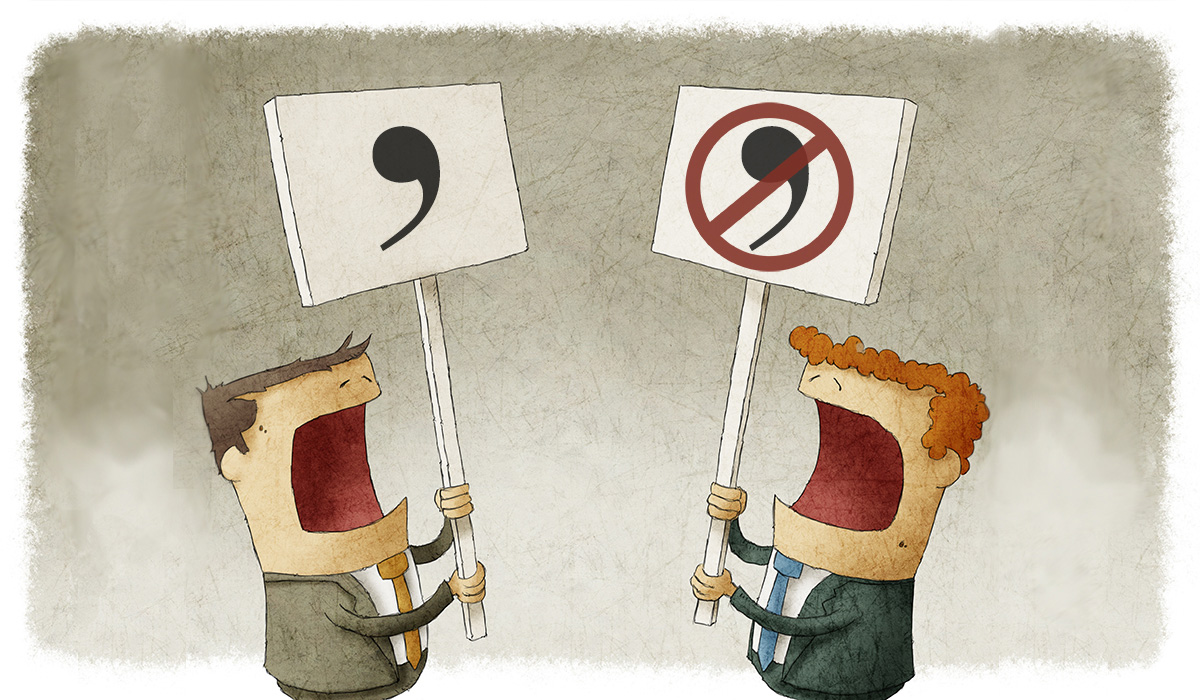 Punctuation doesn’t usually trigger strong feelings – unless you’re talking to a writer about the Oxford comma. This little punctuation mark, also known as the serial comma, is used before the word “and” when you’re listing three or more items.

He bought bread, eggs, and milk at the store.

Here’s the same sentence without the comma:

He bought bread, eggs and milk at the store.

Writer-types tend to fall into one of two passionate camps: those that love the Oxford comma and those that despise it. Since there are no hard-and-fast grammar rules governing its usage, the battle rages on.

All Hail the Serial Comma!

The Oxford comma has its share of ardent fans, especially in the United States. Most American magazine and book publishers use it, and it’s commonly used in online publications. For proponents like me, the main reason is clarity. In some sentences, omitting the Oxford comma can cause all sorts of misunderstandings:

My heroes are my parents, Wonder Woman, and Batman.

The inclusion of the comma makes it clear that the writer is listing multiple idols: their parents and two superheroes. Without the comma, things get a bit confusing:

My heroes are my parents, Wonder Woman and Batman.

The writer may still be listing several idols in this sentence, or they might be letting us know that they have quite a colorful family background. It’s impossible to tell.

Although I’m a huge fan of the Oxford comma, many others, including the editor of this blog, are not! A lot of the time, it can be influenced by where you’re from. American writers tend to favor the Oxford comma but the same doesn’t hold true in other English-speaking countries. Most Australian, Canadian and British stylebooks discourage the use of the Oxford comma.

Even in the United States, a well-known detractor of the serial comma is the AP Stylebook – the definitive grammar guide for journalists. When you’re printing a newspaper, it’s important to pack as much news and information as possible into every square inch. In an effort to conserve space, AP style has traditionally advised against using the Oxford comma.

To Comma or Not to Comma: That Is the Question

You don’t have to be a die-hard word nerd to have strong feelings about the Oxford comma. It turns out that average Americans are fairly split on the issue. The polling website FiveThirtyEight surveyed over 1,100 American adults to see where they stood. It turns out that 57 percent of respondents were pro-Oxford comma, while 43 percent couldn’t deal with the tyranny of that extra comma. Not exactly a tie, but not a crushing victory for the serial comma either.

Although both camps make valid points, I still believe in using the serial comma in most cases, as it often boosts the clarity of a sentence. However, if you’re writing for a client or publication that requires AP Style, follow their guidelines and steer clear of the Oxford comma. But if you’re free to choose, go ahead and make room for it.