Gross Grammar: That vs. Which 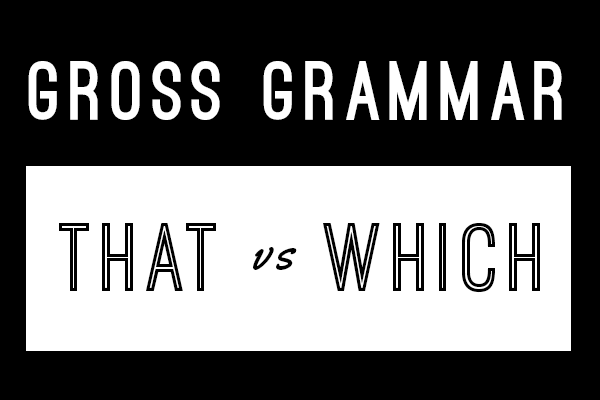 “That” and “which” are often mistakenly used interchangeably in writing, but the two words actually perform different functions. Knowing when to use them correctly is a matter of understanding the difference between a restrictive clause and a non-restrictive clause.

A restrictive clause contains necessary information that changes the meaning of the sentence if removed.

“The walls that have graffiti on them should be painted over.”
“The boats that are full of water need to be taken away.”
“Robots that are made of metal are not the best value.”

A restrictive clause, as you can see from the examples above, restrict the meaning of a sentence to something specific.

A non-restrictive clause contains flavor text that could be removed without changing the meaning of the sentence. These clauses are generally accompanied by commas surrounding them.

“Speed boats, which are allowed on many bodies of water, should be used with safety in mind.”
“I do most of my work on my computer, which is in my bedroom.”

If I removed the non-restrictive clauses from the examples, it wouldn’t alter the meaning of the sentence.

Why Use Them Correctly?

Switching the two terms can change the meaning of a sentence, so it’s important to use them correctly.

Notice the difference? The first sentence indicates that, specifically, your hairless dog is the one that likes to chew on your furniture (maybe you have multiple dogs). The second sentence makes it seem as if you have one dog, he’s hairless, and he loves to chew on your futon. It’s a subtle difference, but as a freelance content writer,  it is best to be as clear as possible.

Finally, when you are referring to people, don’t use that or which. Use “who” instead.

“The boy who had the milkshake ran away.”
Clarity is important in article writing. If your readers can’t follow your meaning, they will often stop reading. Using restrictive and non-restrictive clauses effectively will contribute to your submissions being clear and correct.